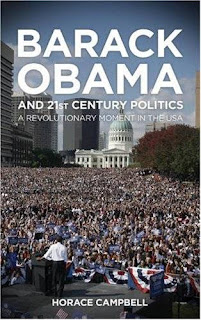 Review title: Barack Obama: A Contradiction Between the Messenger and the Message

"This book helps us recognise that we are living in a revolutionary moment.... We need to develop new consciousness... and become active in new political sites where people are creating participatory democracy in struggles for life, education, health and community."

"Barack Obama's presidency provides a rare opening for change. Whether we make use of it as we should is up to us.... Campbell's book is a bracing reminder of all the threads of history woven into this extraordinary moment, a warning about the military and financial forces trying to keep things as they are, and an inspiration to work for the very different world that could be within our grasp."
- Adam Hochschild, writer and journalist, co-founder of Mother Jones magazine and author of King Leopold's Ghost

"Scholar-activist Horace Campbell has given us a provoocative new perspective on the United State's first Black President. The book is a 'must read' for those interested in Black America and American politics and the shifting global realities of the 21st century. It is sure to spark animaterd debate."

-Barbara Ransby, Associate Professor of African American Studies and History, University of Illinois, Chicago
"Horace Campbell probes the campaign of Barack Obama and finds a revolutionary potential vested in the use of new strategies and in its agenda for progressive social, economic and political change that would be historic if successfully affected in governance and accepted by a society truly ready for change."
- Ronald W. Walters, former Director of the African American Leadership Institute of Government and Politics, University of Maryland, College Park.
Click here to order Barack Obama and 21st Century Politics