Revolutions are not decided by elections: Lessons from the ongoing electoral processes in Egypt 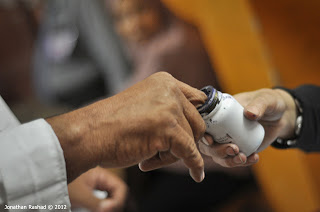 BACKGROUND OF THE NEWS

I have been monitoring the flames and demonstrations that erupted in Egypt while I have been on the road in East Africa for the past two weeks.

I have been in Addis Ababa, Ethiopia, attending a special symposium on Tajudeen Abdul Raheem organized by the United Nations Economic Commissions for Africa (UNECA). The colloquium theme was: Democracy, Governance and the Pan-African Idea: Whither Africa? This was an inspiring and challenging occasion that brought together a number of Pan-Africanists and friends of Tajudeen. The most impressive aspect of the event was the number of young persons who were keen to understand the contributions of Tajudeen and the current relevance of the Pan-African idea.

These questions of the relevance of Pan-Africanism at Africa Hall in Addis Ababa was one more testament of how much the current political leadership has been removed from the spirit of freedom and emancipation. From those who walked the corridors of the current African Union one hears of the intrigue and linguistic divisions that serve to distract from the real issues of unemployment, exploitation, militarism and ruthless governments. Away from microphones, the younger functionaries will admit that the NATO war against the people of Libya is still having repercussions for the African Union. I will have cause to delve into this matter in more detail as I complete the monograph on the failure of NATO and the efforts to strengthen relations with client states of the Africa Command in Eastern and Central Africa. One could not escape the presence of the war in Somalia and its spillover effects for countries such as Ethiopia, Kenya and Uganda who are now proxies for the US Africa Command.

In Addis Ababa it is not possible to escape the sense of heightened security with security checks to enter premises, even restaurants. On African Liberation Day we heard from those who were in contact with the Africa Diaspora meeting held in South Africa. The Global Pan-African constituency will be awaiting a full report of that meeting.

From Addis Ababa I went to Kampala Uganda for another commemorative event on Tajudeen. This was less high profile than the Addis affair but no less wrenching emotionally. One question that kept coming up from young people was: Why did Tajudeen have to go at this time? Was there foul play? How can the continued work of connecting progressive Pan-Africanists be carried forward? It was in a place such as Kampala where one could see the important work that Pambazuka is doing for progressives and peace lovers all over the world. It will be a pity if Pambazuka faces the same fate as Tajudeen.

I listened to the results of the Egyptian elections while I was having meetings on the future of the Global Pan-African Movement. What was comforting for those of us who converged was the sense from our comrades in Kampala that the convening of the next Pan-African meeting had to be in another venue other than Uganda. From the declarations of the 7th Pan African Congress in 1994 it had been agreed to hold the 8th Congress in Libya but now the political change in Libya has ruled out such a meeting there. It was from this same Libya where the current NTC leaders welcomed the results of the first round of the Egyptian presidential elections. Mustafa Abdel Jalil, the chairman of the ruling National Transitional Council , praised the elections as “superb,” stressing that an “a stable Egypt means a stable Arab World.”

I was listening out for commentary from East Africa where the experience of demobilizing the people through elections has been most developed. But there was not a word from the leader of Uganda who had gone on a visit to Eritrea. This visit was just one more manifestation of the way in which former freedom fighters had degenerated into despots.

Ugandan activists were eager to hear of the results of the Egyptian revolution and those who have been organizing walk-to-work campaigns are anxious to see what can be learnt from Tahrir Square. The Ugandan political establishment is afraid of the mention of the word Tahrir Square. I left two copies of ‘African Awakening: Emerging Revolutions’ and the people wanted to know where they could get the books from Pambazuka. There was a similar demand in Addis. The young people wanted to get their hands on the materials on the Egyptian revolutions and the implications for the processes of awakening. If one reads the books and articles on the sham and rigged electoral processes in Uganda since 2001, then one can get a sense of why it is important for the Egyptian revolutionaries to build new structures outside of the parliament and outside of the rigged game that is called elections.

On the plane I have read the book, ‘The Correct Line: Uganda under Museveni’ by Olive Kobusingye. This is a book about a country that is in perpetual electioneering. As the writer observed at the end of this book, “It appears that at any one time an election is being planned, conducted, or contested.”

This tactic of keeping a repressive government in power seems to have been adopted in Egypt. After the revolution in February 2011 that ousted Mubarak, there was a referendum in March 2011. Then between late November 2011 and January 2012, Egyptians were again voting in elections to elect their parliament over three different stages in nine different provinces in each stage. At the end of this process the Muslim Brotherhood and the other Islamist forces emerged winners in the elections. Esam Al Amin has been writing on how to grasp the ‘perplexing dilemmas in reading Egyptian elections.http://www.counterpunch.org/2012/05/29/reading-the-egyptian-elections/

I want to make my own observations on the impact of this presidential election in Egypt for the current conjuncture.

We will agree with those Egyptians who affirm that this orchestrated run off between the power blocs of the old regime will only intensify the struggles for social change in Egypt and North Africa.

THE FIRES WILL BURN IN EGYPT

When the results were made known that Ahmed Shafiq would be one of the two candidates in the run off presidential elections on 16 and 17 June 2012, there were fires and demonstrations in Cairo. This spontaneous combustion had come because the people understood that Ahmed Shafiq was being imposed on them. Ahmed Shafiq had campaigned in the presidential elections as the law and order candidate who would restore stability in Egypt. Subsequent to the uprisings in February 2011, the organized effort to weaken the revolutionary momentum had taken the form of parliamentary elections mentioned above. These elections were held with the state infrastructure of the Mubarak regime, especially the instruments of the old election machine of Mubarak. In his commentary, Esam Al Amin has correctly drawn attention to the role of the electoral commission and how the number of registered voters for the presidential elections escalated beyond the numbers for the parliamentary elections.

The internal and external forces of ‘stability’ and ‘order’ had reorganized and dictated the direction of the election run off. On Monday May 27, it was announced that the run off in June would be between Mohamed Morsi of the Muslim Brotherhood representing the Freedom and Justice party against Ahmed Shafiq, the last prime minister of Hosni Mubarak.

During the 50-year period of the military and Egyptian capitalists, the Muslim Brotherhood had used the mosque for political organizing. During the Cold War, this religious organization had been embraced by the Western powers and the anti-communist forces in North Africa and West Asia. It was from the ranks of this religious-political formation that Western intelligence agencies had recruited thousands to fight the Soviet Union in Afghanistan.

Despite the fact that the parliament was dominated by the Freedom and Justice Party, it had passed a law barring top Mubarak officials like Mr. Shafik from the presidency. In the midst of an election campaign with more than 11 strong and viable candidates, the election commission ruled that Shafiq was eligible to contest the election. Despite this ruling the other candidates had proceeded with the ritual with the confidence that the remnants of the Mubarak regime were so discredited that there was no possibility Shafiq would emerge as one of the run off candidates.

The media had focused attention on the following candidates: Abul Fotouh, formerly of the Freedom and Justice Party, Amr Moussa, former foreign minister of Mubarak, and Hamdeen Sabbahi, an independent politician who had campaigned on the basis of the ideas of independence and freedom that had been championed by Gamel Nasser. From the press reports of the campaign the information coming out was that Abu Fotouh and Hamdeen Sabbahi were the two strongest candidates. Yet, on Friday evening May 25 local Egyptian media and international media began to announce that the run off would be between Mohamed Morsi of the Freedom and Justice Party and Ahmed Shafiq. When this announcement was made, the people who were cautious waited for the official results because it was clear that there was no way the vote could have been counted that quickly. When the runoff was confirmed on Monday May 27, the fires erupted.

We now know more of the machinations of the state but we also understand the need for long term planning for fundamental changes beyond elections.

We have heard that Abul Fotouh has rejected the results outright. Sabbahi's Karama party has said it will boycott the runoff on 16 and 17 June. Other commentators have reflected on the kind of alliance that will prevent Ahmed Shafiq from emerging as the next president of Egypt after June 17.

The Egyptian election results have shown that the state of the forces of repression must be dismantled before elections can have meaning. Experiences from Zimbabwe, Kenya and Uganda have pointed to the reality that progressives cannot hope to make real changes within an electoral system that reinforces neoliberal economics and low intensity democracy. The people in Egypt had revolted against unemployment, hunger, homelessness, police brutality, poverty and the alliance of the military with the United States and Israel.

The Western media is blaming low turnout in the first round by saying that about 46 percent of Egypt’s approximately 50 million eligible voters turned out for the election. This is not the entire story. The real story is that the question of the restructuring of the Egyptian economy and the dismantling of the repressive military structures were not before the people.

Religious leaders cannot depend on religion to solve the social questions of the peoples. Neither of the two candidates, Mohamed Morsi or Ahmed Shafiq, can claim to represents the interests of those who had gathered in Tahrir Square calling for a new regime.

The Western media reported the comment of one campaigner, Atef Ezz El-Din: “This just means that the revolution continues. Either we make it happen or we all die."

Atef Ezz El-Din was reflecting a long held maxim; revolutions are not decided by elections.
Posted by Horace Campbell at 5:40 AM