Africa and the BRICS formation: What kind of development? 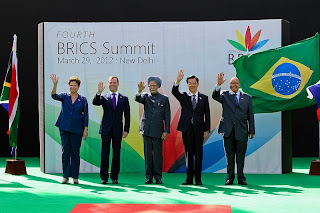 The fourth BRICS Summit met in New Delhi, India, on 29 March 2012 under the theme, ‘BRICS Partnership for Global Stability, Security and Prosperity.’ From the press reports coming out India, we have learnt that the leaders of Brazil, Russia India, China and South Africa signed two pacts to stimulate trade in their local currencies and agreed on a joint working group to set up a South-South Development Bank that will raise their economic weight globally.

The participating banks for this new international financial struggle include the Export Import Bank of India, Banco Nacional de Desenvolimento Economico e Social (BNDES) of Brazil, State Corporation Bank for Development and Foreign Economic Affairs of Russia, China Development Bank and Development Bank of South Africa. At the end of the meeting the five leaders issued the 50 point Delhi Declaration declaring their intention to further strengthen “our partnership for common development and take our cooperation forward on the basis of openness, solidarity, mutual understanding and trust.” [1]

In our commentary this week we reflect on the seismic changes in the global economy and the reality that Europe has suffered so much from the capitalist crisis that the major capitalist corporations are making preparations for the collapse of the Euro. [2] With each passing day there are reports in the financial press that ‘investors are taking huge sums out of eurozone bonds. [3] Where the BRIC leaders had started a formation to facilitate their expanded trading relationships, the collapse of the dollar zone and the Eurozone has accelerated so fast that the policy makers are now improvising without a clear road map as to a project of real international solidarity. To their credit, the BRICS leaders have seen concretely that there is no alternative to moving from a unipolar world to a multipolar world in the 21st Century that is based on mutual respect and an end to hierarchies. Yet, as we will argue in this extended commentary, the focus of the planning of the peoples of the South should no longer be on the basis of bargaining for better terms with western capitalist states. We will maintain that for genuine social and economic transformations to take place in these countries representing 45 per cent of the world’s population, it will be necessary to make a clean break with the ideas of ‘historic capitalism.’ [4] Whether the BRICS formation will be the embryo of a ‘new wave of independent initiatives from the South’ or based on regional hegemons will be dependent on the extent to which the forces of social justice and emancipation engage the political and ideological struggles around BRICS. A 17 point action plan focused on issues relating to finance, health, population, food security and multilateral energy cooperation within the BRIC’s framework provides spaces for a new research and policy agenda that could strengthen and consolidate the goals of a new framework for economic cooperation. In this way progressive scholars can give meaning to the call for the expansion of the channels of communication, exchanges and people-to-people contact amongst the BRICS, including in the areas of youth, education, culture, tourism and sports. [5]

The current leaders of India aspire for a BRICS and the ‘development bank’ to be an auxiliary institution of the World Bank. Read more
Posted by Horace Campbell at 2:48 AM