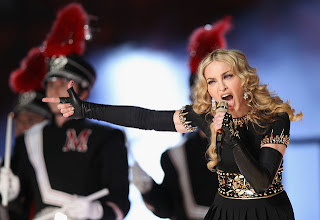 On Sunday February 5, 2012 one of the biggest spectacles in the US entertainment and sports world took place, Super Bowl XLVI, the annual championship game of American football. It was during the half time show when over 111 million spectators watched when the world famous songstress, Madonna unveiled her statement of World Peace. These two words were released as a puff of smoke after she sang one of her more well-known songs, “Like a Prayer.”

The Super Bowl half time show is one of the most coveted slots in the United States’ entertainment calendar. Remarkably, this artist was able to sing a medley of 8 songs in ten minutes. In these ten minutes Madonna brought out a performance that must have taken months of rehearsing, using the most advanced technology and working with the circus entertainment company, Cirque du Soleil. Drawing on the talents of other younger radical and anti-imperialist artist M.I.A, the unclear Nicki Minaj along with others such as LMFAO and Cee Lo Green, Madonna brought out collaboration. With her “World Peace” statement, she intended the halftime show was to make a statement to the US society to get off its militaristic path. There are sections of the militaristic wing of the United States which is currently in a fever pitch of discussion about ‘Will Israel Attack Iran’?

There is not a day where there is not speculation in the media whether the Israelis will blackmail Obama into joining Israel in an attack on Iran. Ira Chernus in his submission, “New York Times Hypes Israeli Attack On Iran” has drawn attention to how mainstream newspapers such as the New York Times and the Washington Post are hyping the question of war against Iran. The Madonna message was presented in the midst of this media pressure for war. Read more
Posted by Horace Campbell at 5:35 PM