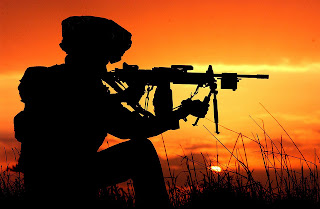 As the capitalist depression deepens, there are militarists in the United States who are now openly championing war so that the US government would embark on another massive investment for missile defense, rather than discussing reduced military spending. The drumbeat of war is so loud that it is becoming deafening. Accompanying this drumbeat is the unstated idea that there are too many non-white people in the world and that a limited nuclear war can be managed and won. Underlying the call for war is also the racist fear of a world where whites are in the minority and in such a war the racists can eradicate millions of non-whites and non-western people from the planet. The immediate plans for war are now concentrated in the Persian Gulf, with the escalating propaganda war about the nuclear capabilities of Iran. However, at the present moment Iran does not possess Intercontinental Ballistic Missiles (ICBM) so the discussion is really about war with contingency planning for the escalation beyond Iran. This is because the strategic analysts know full well that war with Iran will escalate beyond the borders of Iran. Already Pakistan has warned that it will come to the defense of Iran if it is attacked.

Decent humans everywhere must pay attention, actively mobilise and raise their voices against the present mobilisation for warfare. There is a debate on Ballistic Missile Defense among specialists. This struggle is part of a larger context where every day there are reports of the preparations by Israel to strike Iran. Inside the United States, those sections of the financial-military complex that are gearing up for new wars are stepping up the military information operations (psychological warfare to implant fear) against citizens of the United States. In short, the plans for war can be seen as a major propaganda war against the citizens of the United States. There is desperation by sections of the financial oligarchy who are afraid of the November elections and that Barack Obama may win a second term. In this planning for war the interests of the militarists merge with the present political leadership in Israel.

Report after report continues to come out that the Israelis will attack to prevent Iran from developing nuclear capabilities. This is the same Israeli state that possesses between 200 and 300 nuclear weapons. Israel is already involved in electronic warfare, cyber war and other forms of low intensity war against Iran.

In our contribution this week we will underscore the point that this is a very dangerous situation. This is brinkmanship and is designed to intervene in the politics of the United States to push the society towards a global war in order to secure the regional military monopoly of Israel. This military monopoly perpetuates the status of Israeli military occupation and illegal settlements in the homeland of the Palestinian people. Next week the Prime Minister of Israel will visit the United States and through the lobbying organisation, the American Israel Public Affairs Committee (AIPAC), the Prime Minister will seek an advantage by manipulating the dangerous situation which can take humanity into nuclear war. The brinkmanship is so dangerous that even Cold Warriors such as Zbigniew Brzezinski (former National Security Advisor under President Jimmy Carter) have suggested that President Obama should make it clear to Israel that if they attempt to attack Iran's nuclear weapons sites the US Air Force will stop them. It is not usual to read statements such as these in the US media, “Obama Administration Should Tell Israel U.S. Will Attack Israeli Jets if They Try to Attack Iran”.

Brzezinski had appealed to Obama three years ago, long before the propaganda war reached this precipitous stage. Brzezinski, who considers himself a strategic thinker, said today that if Israel attacked Iran, the state of Israel would not survive in its current form. In short, it is possible that we are entering a period of catastrophic warfare. Read more
Posted by Horace Campbell at 5:38 PM