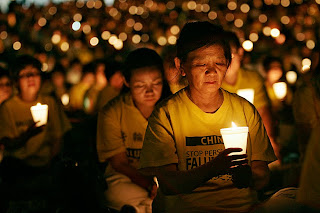 On 17 December 2011, there was the 11th annual conference on Chinese diplomacy organised by the Carnegie-Tsinghua Center for Global Policy held at Tsinghua University with two parallel meetings. Under the title of ‘New Discipline, New Paradigm and New Strategy’, the dominant question in this conference was the changed international situation, especially the new internationalisation of the issues of the South China Sea. Many themes emerged, and I want to identify two. The first was the articulation by various specialists that China will have to be creative and to define new strategies for a foreign policy that will guarantee peace and international stability. The second theme was the reaffirmation by China’s Vice Minister of Foreign Affairs that China was on the road to build socialism and that its foreign policy was one path in this road.

In relation to the first overriding theme, I was intrigued to hear from one international presenter, Robert Kaplan, that the Chinese involvement in Kenya and the building of a new town in Lamu was part of a wider strategy for the projection of Chinese naval power in the Indian Ocean, linking new port facilities from Kenya to Sri Lanka to Pakistan, Bangladesh and Myanmar. Meetings such as these reconfirmed the necessity for peace activists to have a global view in order to grasp how rivalries between particular societies can negatively affect the pace of transformation in other societies. On the second theme, there was a basic contradiction between this reaffirmation of the tasks of building socialism and the current intellectual culture at the highest levels, which is subservient to western and realist principles of politics and economics. In my recent work among scholars of international relations at the mainstream universities in China it was rare to encounter a scholar who was familiar with ideas of South–South relations as a theoretical framework. The Marxism of the party cadres was so caricatured that it had no appeal for the young. It was the environmentalists and activists for the landless who were pushing for a new conception of politics. Read more
Posted by Horace Campbell at 3:26 PM