Abdoulaye Wade, are you a fraudulent Pan-Africanist? 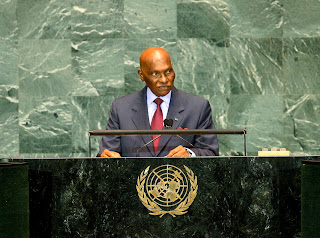 Abdoulaye Wade is 85 years old. Or is it 86? Or 87? Who Knows? He is campaigning for a third term as the president of the Republic of Senegal. Wade won the elections to be president in 2000 and won another six-year term in 2007. There will be elections on Sunday, February 26, 2012. Under the Constitution of Senegal, Wade is not eligible to run for a third term. A questionable panel of judges tampered with the interpretation of the Constitution so that Wade could be ‘given’ permission to stand for a Third term. The people of Senegal have responded and have said that they have not given him permission and have been making daily manifestations against the potential third term presidency of Wade. It is likely that he will come through the elections on Sunday over the dead bodies of many Senegalese. For the past fifty years Wade represented himself as a Pan-African fighter for dignity and unity.

During the presidency of Leopold Senghor, the first president of Senegal after independence, Wade campaigned to form a political party and unsuccessfully ran against the next leader of the Socialist Party, Abdou Diouf. The Socialist Party of Senghor had dominated Senegalese politics for some 40 years but in the era of structural adjustment, this party started implementation of the ‘reforms’ to deepen capitalist exploitation. The ‘reforms’ of structural adjustment involved the strengthening of the local capitalist class in Senegal and included the privatisation of financially sound state-owned entities. In the process new social forces came into being while the majority became impoverished. Hundreds of young Senegalese started to leave the country with the exodus increasing daily. Abdou Diouf was defeated in the elections of 2000 because Wade campaigned on behalf of the people, calling himself the ‘Street President’.

Twelve years later the impact of the ’structural adjustment reforms’ are being felt even more and the people want a government that can respond to their needs. The opposition in Senegal is divided, but this is one of the most sophisticated countries in Africa with a long history of popular struggles. During the colonial period, it was the scene of one of the most protracted strikes for better living conditions. Wade had ridden on this history and had proclaimed himself as a progressive Pan-Africanist. For a short while, he was one of the few leaders calling for the immediate unification of the peoples of Africa and the building of the infrastructure for the United States of Africa. Today, as he turns the weapons of this state against the people, we are calling on Mr. Wade to step aside or go down in history as a fraudulent Pan Africanist. It is not too late to listen to the people.

The basic creed of Pan-Africanism is the dignity of human beings, especially the dignity of Africans. This concept of dignity has gone through many phases. At one moment it was the struggle against colonialism; at another moment, it was s struggle against apartheid. It was a struggle against Jim Crow and racism. In the 21st century, the Pan-African struggle combines the anti-colonial and the anti-racist history with a new thrust for dignity and renewal of the African person. Increasingly, as the poor people of Africa suffer the brunt of the capitalist crisis, it is clearer that the present state structures in Africa cannot be the basis for freedom and dignity. Africa cannot be free with the structures of the Berlinist state along with the institutions of exploitation and domination.

The peoples of Senegal understood this basic dictum of Pan-African unity and freedom and the ordinary workers, traders and cultural workers from Senegal claimed African and international spaces. They do not respect colonial borders. They do not respect the barriers to the free movement of people. This Pan-Africanism at the grassroots is most evident among the women who are the connective corridor between the Pan-African trade networks across Africa. Whether it is Angola, Zambia, South Africa, Ghana, one will find these traders, crafts persons who do not allow language, currencies or political forces to prevent them from carrying out their day to day existence.

It is this culture of freedom in Senegal that produced some of the greatest Pan-African thinkers and Cheikh Anta Diop stands heads and shoulders over many. Diop’s work and his contributions on the cultural unity of Africa remains one of the foundation documents for the building of the union of the peoples of Africa. Younger Pan-Africanists will do well to read his writings on Pan-Africanism and the need for one government in Africa. Diop was also aware of the need for a special place for women in this united Africa so he suggested a bicameral arrangement with special deliberative bodies for women. It is also Cheikh Anta Diop who wrote and spoke of the vibrant African optimism that will take Africa out of the barbarism of capitalism. Senegal also produced the top film maker and writer, Ousmane Sembène, whose Pan-African writings have lifted the hearts and spirits of peoples everywhere. Sembene wanted humans to have dignity. Then, there are the hundreds of cultural voices who use different mediums to bring across their message. Senegalese rappers are now joining the traditions of Bob Marley, Peter Tosh and other Pan-African in singing songs of freedom and emancipation. Read more
Posted by Horace Campbell at 1:52 AM