Why the attempted remilitarisation of Africa will fail: Lessons from the deployment of Kenyan troops into Somalia 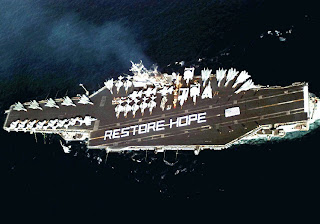 At the same moment when the Libyan adventure backfired with the US Africa Command (AFRICOM) retreating from taking credit for the end of the Gaddafi regime, the US government announced the deployment of 100 troops to Uganda to assist the government of Yoweri Museveni to track down the Lord’s Resistance Army (LRA). Later the same month in October 2011, there was news that the Kenyan army had been deployed into Somalia in pursuit of armed Somalians known as Al-Shabaab (‘The Youth’) that Kenya blames for a series of kidnappings on its soil. It was also revealed that France would be supporting the Kenyan invasion in Somalia.

Sensitive to the future relationship with Africans who want peace, the spokespersons for AFRICOM have been ‘leading from behind’ in this Kenyan operation. In this article, I argue that of the US-supported ventures in Africa, the foray into Somalia represents a heightened threat to peace and reconstruction in Africa, especially East Africa. I will argue that this Western-supported incursion is more against the Kenyan people than against the forces of Al-Shabaab, or whatever name that will be given to the musical chairs of military entrepreneurs in Somalia.

In the past 20 years, the US support for militarism in the Horn of Africa has destabilised this region of Africa. Since independence in 1963, Kenya has been the cockpit of imperial ventures in Africa. This was because the radical traditions of Kenya from the period of the Land and Freedom Army had to be contained. After three periods of containment using force, non-governmental organisations and sowing divisions among the progressives, the awakening in Africa pointed to the vibrancy and potential for people-centred change in Kenya. Thus, the security planners in Western states were not going to wait to be surprised by a Tahrir Square uprising in Kenya.

This process of remilitarisation will fail in Africa, just as support for Mobutism and support for apartheid failed decades earlier. The challenge for peace and social justice forces in North America and Europe is to take the question of the militarisation of Africa to the forefront of the struggles against the one per cent, and link the issues of militarism more closely to the banking industry and its private military contractors.

I will start with the six points that highlighted the catastrophic failure of AFRICOM in Libya, retrace the failure of the Operation Lightning Thunder of 2008 and then examine the fear of revolutionary uprisings in Kenya. The conclusion will retrace the intellectual and political crisis within the US ruling circles in this depression, and explore why the current remilitarisation of Africa is being opposed fiercely in Africa and will influence the present movement for peace and social justice in North America and Western Europe.

CATASTROPHIC FAILURE IN LIBYA Read more
Posted by Horace Campbell at 3:12 AM