Nanking and the lessons of genocide 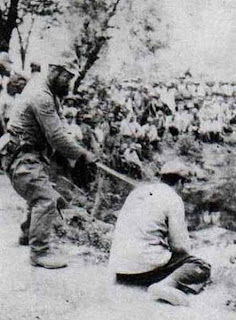 The city of Nanjing in the People’s Republic of China stands as one more monument to genocidal thinking and genocidal actions. Far more important, however, is the reality that with new thinking, it is possible to reconstruct society and to create new humans. From Nanjing one can see the great possibilities for healing after wars if humans step back from the social system and ideas of human hierarchy that inspire genocidal politics and genocidal economics.

This week, I have been visiting Nanjing, formerly known as Nanking. This city sitting on the eastern end of the Yangtze River carries with it hundreds of years of transformation and politics of Chinese society and culture. Emperors had made this one of the historic capitals. After the overthrow of the Qing dynasty and after Ching Kai Shek became the leader of the Republic of China, Nanking was the capital of all of China. This city, now a vast conurbation of close to 8.5 million citizens, is the home of the mausoleum of Sun Yat Sen. Sun Yat Sen is a national hero of China who is revered by socialists and capitalists of Chinese origins at home and abroad. Located in the south eastern area of the present People’s Republic of China, Nanjing is a city rich with history, art, museums, industries, libraries, universities, lakes, mountains and most important people who now thrive to make a good life. Yet, these people live with the memory of one of the most horrific genocides of the 20th century.

After the 1911 revolution, the nationalists were seeking to consolidate power. In the midst of the last depression, the imperial forces of Japan invaded China in 1931 and fought to subjugate the Chinese people for 14 years. As one component of this subjugation by this imperial army, there was an attack on the Nanking. These Japanese imperial forces overran Shanghai in 1937 and proceeded to capture the capital, Nanking in 1937. On 13 December 1937, the Japanese army occupied Nanking and over a period of six week to eight weeks slaughtered over 300,000 persons in an orgy of rape, theft, arson and other unspeakable crimes against humanity. Nancy Chang chronicled the heinous deeds in the book, ‘The Rape of Nanking: The forgotten Holocaust of World War II’.

On the first page of the book she wrote:

‘The chronicle of humankind’s cruelty to fellow humans is a long and sorry tale. But if it is true that even in such horror there are degrees of ruthlessness, then few atrocities in world history compare to the intensity and scale of the Rape of Nanking during World War II.’ Read more
Posted by Horace Campbell at 3:18 AM