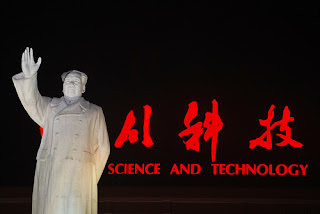 Last weekend, 18-22 November, our department, the Department of International Relations of Tsinghua University took a school trip to Changsha and Shaoshan in Hunan Province, the birthplace of Mao Zedong. Mao, known to many older non-Chinese as Mao Tse-Tung was one of the great revolutionary leaders of the 20th century who led the Chinese Communist Party to a tortuous victory in 1949. Sixty years ago, the writings and teachings of Mao were very popular, especially his dictum that:

‘Revolution is not a dinner party, nor an essay, nor a painting, nor a piece of embroidery; it cannot be so refined, so leisurely and gentle, so temperate, kind, courteous, restrained and magnanimous. A revolution is an insurrection, an act of violence by which one class overthrows another.’

As a Chinese leader who had emerged out of civil wars and revolutions, the Little Red Book of Mao had been popular in the 1960s. In a new era of revolution, (now expressed in the protracted battles in Egypt with reverberations around the world) this trip afforded us to reflect collectively on the contribution of Mao, despite the fact that his legacy is bound up with controversies on the paths forward for the transformation of China in the 21st century.

Although many in China and in the West seek to disfigure his contributions to revolutionary thought, it is important that in this era of the intellectual and political ferment unleashed by the capitalist depression, we are able to grasp the strength and weaknesses of Mao in order to build on the positive contributions that were made in relation to revolutionary theory and practice. Socialist values and the new culture that appreciates humans over commodities are now being discussed in a period of anxiety and uncertainties.

As we travelled on Lake Dongting Hu and appreciated the majestic architecture and art of the old Yueyang Lou Tower along the shore, we could see the traffic on this lake with the hundreds of barges transporting sand and coal on the water highway in the middle of China. This striking hothouse of commercial and industrial activity was an indication of the economic engine of China working overtime. Read more
Posted by Horace Campbell at 3:22 AM