The execution of Gaddafi and the attempted humiliation of Africa 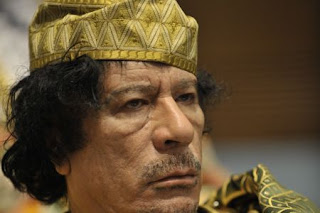 The inability of the Western media and other “information” sources to manage the news of the execution of Colonel Muammar Gaddafi was compounded by the news, according to the New York based Human Rights Watch, that 53 supporters of the ousted regime were executed at a hotel in Sirte with their hands tied behind their backs (Huffington Post October 26, 2011). Wall-to-wall news bulletins of the demise of Colonel Gaddafi, which should have been a moment of victory for the imperial forces, has now turned into a public relations disaster and nightmare for those military planners who want to distance themselves from the gruesome details of the execution.

Gaddafi had vowed to fight to the end. Thus, the outcome of his death was not surprising. But the NATO forces tried to capitalize on Gaddafi’s cockiness and delusions by trying to re-package his death as a result of a firefight. But they could not cover up the truth. Video footage taken on camera phones show a wounded Colonel Gaddafi being dragged, beaten and tortured but very much alive. In the next set of footages he is dead. The videos are strong evidence that the Geneva Convention was violated.

According to international law, Gaddafi’s death would constitute a war crime because he was killed while in captivity. Article Three of the Convention (III) Relative to the Treatment of Prisoners of War (Third Geneva Convention), explicitly prohibits “the passing of sentences and the carrying out of executions without previous judgment pronounced by a regularly constituted court, affording all the judicial guarantees which are recognized as indispensable by civilized peoples.”

The immoral and illegal actions by the NATO-backed military forces and private contractors in Libya were further exacerbated by the lack of respect shown towards the religious and cultural traditions of the Libyan people when the mortal remains of Colonel Gaddafi and his son, Muatassim, were kept in a meat locker until the bodies started to decompose. Read more
Posted by Horace Campbell at 3:23 AM