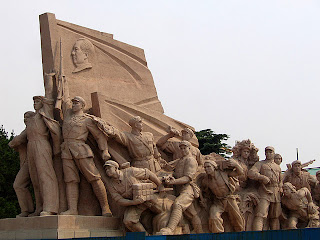 From 1-7 October, the people of China celebrated Golden Week. October 1, 1949 is the day when the Peoples Republic of China (PRC) was founded with a ceremony at Tiananmen Square. Since 1949, China has grown to be the second largest economy in the world, with a population of more than 1.3 billion. It is a new global player both within the international community and in the formation called BRICS (Brazil, Russia, India, China and South Africa). The new shopping malls across the grand urban conurbations, the gleaming airports, together with high-speed trains, the Beijing Olympics and major nuclear-power expansion, serves as a marker for the China’s emergence as a new contending force. In every part of China the bursting of energy and work to change is everywhere and also manifest in the National Day celebrations. There was a great outpouring of pride for a week as millions of citizens were on the , going home to see family and visiting historical sites to celebrate the history and culture of China and Chinese revolutions. This is the celebration of the revolution that brought the unity of the society and brought Communist Party of China (CPC) to power in 1949.

October 1, 2011 marked 62 years since the victory of the revolution that had been led by Chairman Mao Ze Dong and the Communist Party. This communist party survived the zigs and zags of great leaps, cultural upsurges and the period of the fall of the socialism that was practised in the Soviet Union and Eastern Europe. During this Golden Week, there were over 300 million people on the move, putting the transportation system of a planned economy to the test. The management and protection of national heritage sites was also put to the test as millions and millions of citizens who were proud of their country thronged to shrines, temples, and geoparks at the more than 119 designated scenic and historic spots. The national media reported that there were more than 24.3 million visitors to the spots that kept records. We do not know of the millions more who were on the move going to meetings and other forms of social connecting. Read more
Posted by Horace Campbell at 3:03 AM