South Sudan and the Meaning of Independence 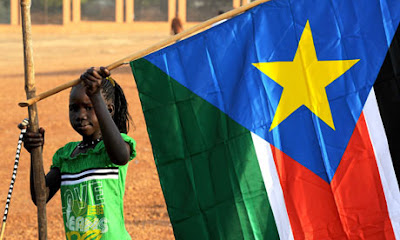 WELCOME PEOPLE OF SOUTH SUDAN TO THE COMITY OF NATIONS

On 9 July 2011, the people of the Republic of South Sudan raised their flag in Juba to symbolize the declaration of political independence. This ascension to independence was one more step in the peace process that is supposed to bring the peoples of the Sudan from war to peace. This peace came after the second civil war. The first civil war which began a year before the independence of Sudan lasted from 1955 to1972. In 2005, the Comprehensive Peace Agreement was signed after 23 years of war (1982-2005). This agreement stipulated that after six years there should be a referendum where the people of South Sudan would make a decision whether they would remain part of the Sudan or become an independent state.

A referendum was held in January 2011 and South Sudanese voted overwhelmingly for independence. The present political leaders of the Sudan Peoples' Liberation Movement (SPLM) had campaigned for independence as the option. One other option would have been for the leaders in the Sudan to fight for transformation for all people of the Sudan and to become a force to beat back the conservative fundamentalists in the northern part of the Sudan. We respect the choice of the leaders of South Sudan and this new state will be welcomed to be the 54th member of the African Union and the 193rd member of the United Nations. With more than 2.5 million persons perishing in the last war that lasted for 23 years, the people paid a very high price for this independence and serious engagement will be needed by the pan African community along with all progressive persons to ensure that the sacrifices for independence would not be in vain.

In welcoming the Republic of South Sudan to membership of the African Union, our branch of the Pan-African movement does not in any way diminish the call for the urgency of the unity of all the peoples of Africa. With each passing day and the crisis of capitalism, rampant militarism and imperialist military interventions, gradual implosion of the dollar, regional trade blocs and challenges of global warming, it is clearer that only a democratic and united people of Africa can negotiate with the new emerging powers to ensure that Africans can have the space for transformation, peace, and social reconstruction.

Commenting on this question of South Sudan before the referendum, I highlighted our most recent experience in Africa of an emerging state that was carved out of an existing state, the case of Eritrea. Twenty years after independence, the peoples of Eritrea are now fighting against the government that was supposed to be a leading force for liberation. Eritrea and Ethiopia have fought wars senselessly over strips of land, mainly Badme. Both societies have diverted scarce resources to military projects instead of concentrating on the health and wellbeing of the people. Read more
Posted by Horace Campbell at 12:18 PM