Science, the Future, and the Revolutionary Moment: A Review of Michio Kaku’s "Physics of the Future" 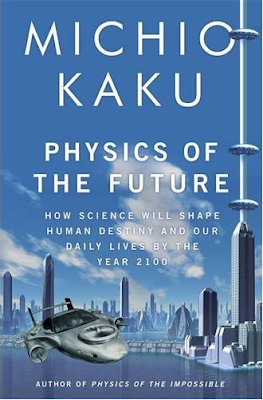 Review of Michio Kaku’s "Physics of the Future: How Science Will Shape Human Destiny and Our Daily Lives by the Year 2100."


We are still in the early stages of the 21st century, yet with every passing day, humans are confronted with rapid transformations in the fields of genetics, robotics, information technology, cognitive sciences and nanotechnology. We are promised longevity and trips to space even while harnessing the power of the sun with the potential for unlimited energy for everyone on earth. The transformations in high-energy physics, bio-molecular medicine and quantum computing have revolutionary potentialities to change social relations among humans and between humans and the universe. The question of how these technologies will further revolutionise the current century is the subject of a new book by Michio Kaku, ‘Physics of the Future: How Science Will Shape Human Destiny and Our Daily Lives by the Year 2100’. This book attempts to convey to the lay person the most up to date directions in the fields of science and technology. In separate chapters, Kaku examines the future of computers, artificial intelligence, medicine, nanotechnology, energy and space travel over the next one hundred years. In each chapter he splits the future into three sections – the Near Future (Present to 2030), the Mid-Century (2030 to 2070) and the Far Future (2070 to 2100) – and he discusses the development and impact of science in each futuristic period. My critique of the book stems from the need to voice what is missing in the book: a note of reminder to Western scientists that while they seek to dominate nature and harness its full power, there are still billions of humans who live without the basic necessities of life. Scientists, like Michio Kaku, who are ensconced in laboratories in Europe and North America fail to understand that while neoliberal and corporate support for research may foster an economic environment conducive to a particular type of technological innovation, this same neo-liberal capitalism also accelerates inequality, poverty, and ecological degradation for the majority of humans on the planet.

WHO IS MICHIO KAKU?

Michio Kaku is a Japanese-American physicist who explores the terrain of the fourth dimension (usually referring to time) in physics. As a high school youth, he attended the National Science Fair with a home-made atom smasher he built in his parents' garage. Because of his creativity he was spotted as a promising physicist by Edward Teller, known by some as ‘the father of the atom bomb.’

Edward Teller was one of the most famous scientists of the twentieth century who was associated with the Manhattan project, the collaborative effort of the West that led to the development of the atom bomb. Hungarian-born theoretical physicist Teller is also credited for passing on the scientific information on how to build a nuclear bomb to the Israelis. Teller was co-founder of Lawrence Livermore National Laboratory, one of the numerous scientific labs across the world that was placed in the service of the United States military and consumed billions of dollars from the Defense Advanced Research Projects Agency (DARPA).

Kaku is a descendant of Japanese immigrants to the US, and his parents were interned in a concentration camp in California during the Second World War. After being mentored by the ultra-conservative physicist Edward Teller, Kaku wrote a very critical book critiquing the United States’ plans for nuclear war entitled, ‘To Win a Nuclear War: The Pentagon's Secret War Plan’. This was a public break with his mentor and the physicists associated with the military-industrial complex. For decades, Michio Kaku consciously associated himself with the progressive media. As a presenter on WBAI Pacifica Radio in New York City, he has been popularizing the ideas of theoretical physics. Kaku is currently the Henry Semat Professor of Theoretical Physics at the City College of the City University of New York. He is co-founder of string field theory in physics and is the author of 10 books and over 70 scientific articles in physics journals. His latest bestseller, ‘Physics of the Future: How Science will Change Daily Life by 2100’, became number seven on The New York Times Bestseller List just a few weeks after publication.

PHYSICS OF THE FUTURE

In the first chapter of ‘Physics of the Future’, Kaku predicts that computer power will increase to the point where computers, similar to the fates of electricity, paper, and water will, ‘disappear into the fabric of our lives, and computer chips will be planted in the walls of buildings.’ In Chapter 2, ‘Future of Artificial Intelligence: Rise of the Machines,’ Kaku discusses robotic body parts, modular robots, unemployment caused by robots, surrogates and avatars, and reverse engineering of the brain. Kaku shares the perspective of many in Silicon Valley who believe that emerging technologies are qualitatively unique in the capacity to manipulate human beings at the genetic level thereby potentially altering ‘human nature’ or even changing the meaning of life itself. It is in chapter 3 on the ‘Future of Medicine’ that Kaku imagines a future, ‘where surgery is completely replaced by molecular machines moving through the bloodstream, guided by magnets, honing in on a diseased organ, and then releasing medicines or performing surgery. This would make cutting the skin totally obsolete. Or magnets could guide these nano machines to the heart in order to remove a blockage of the arteries.’ Read more
Posted by Horace Campbell at 4:36 AM