Magnus Malan and Crimes Against Humanity in Africa 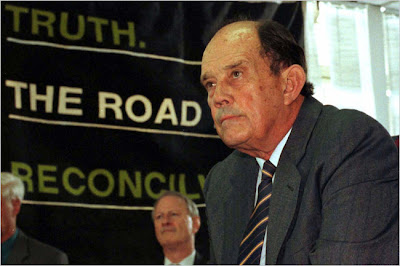 General Magnus Malan, the chief architect of the total onslaught of the apartheid military, passed away on 18 July 2011. This total onslaught strategy was the idea that South Africa was threatened by a communist conspiracy and that the South African apartheid state must respond with economic, political, ideological, psychological and military tools to defend capitalism and white supremacy. Malan was minister of defence for 11 years, 1980–1991, and it was under his tenure that the apartheid war machine spread death and destruction across Africa. Under his tenure as minister of defence this illegal state decided to weaponise biology. The results are still being felt across Africa today with the ramifications of the biological warfare project that was called Project Coast. Malan’s life and death should remind young people that the fight for freedom must be protracted and that the economic, military and political defeat of apartheid is still a task to be completed. Africans may occupy positions of political power in South Africa but the economic legacies of apartheid are very much flourishing.

Internationally, the crimes of the Nazis are condemned. German society no longer celebrates Hitler and the Nazis as great leaders, but in South Africa the publishing houses and think-tanks that were nourished and financed by Magnus Malan thrive and distort history. Many of these think-tanks have changed their names, but not their basic philosophy. Yet the people of South Africa have tried to transcend the ideation system of revenge and bitterness. The people have attempted to draw on the principles of Ubuntu I practise. Hiding behind the new philosophy of Ubuntu, the war criminals of South Africa have sought to rehabilitate themselves as servants of the South African state and as fighters against communism. The central place of the military in the processes of accumulation and enrichment has been taken over by sections of the African National Congress (ANC). Younger South Africans must work harder to completely understand the real consequences of apartheid and to remember that one cannot dismantle the system with the same ideas that built a system.

APARTHEID AS A CRIME AGAINST HUMANITY

Magnus Malan was born into white privilege in South Africa in 1930 when the ideas of Hitler and white supremacy had not yet taken over the leadership of the organisation that was to later become the National Party. By the end of the Second World War, the National Party had completely absorbed the ideas and principles of Nazism and codified these ideas into a series of laws and forms of organising society that still cripple South Africa to this day. Operating through a secretive organisation called the Afrikaner Broederbond, some of the adherents of the National Party had been interned during Second World War because of their overt support for Adolf Hitler and the ideas of the Nazis. Read more
Posted by Horace Campbell at 4:28 PM