Time to Bury the IMF: Towards an International Bank for Reconstruction and Reparations 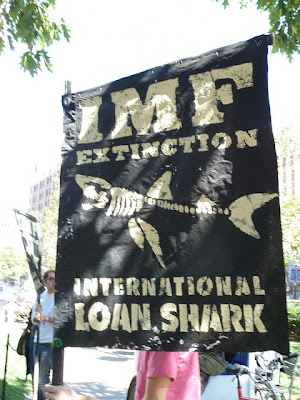 It was a fitting metaphor as Dominique Strauss-Kahn, managing director of the International Monetary Fund (IMF) was arrested on charges of assault, attempted rape and sexual abuse. The charges were brought after Strauss-Kahn assaulted an African woman from Guinea, who worked as a housekeeper in a hotel in New York City. The image of Strauss-Kahn in handcuffs was fitting insofar as this is the image that should be presented of the entire international financial system that is anchored in the Bretton Woods Institutions. For over 60 years, these institutions (the IMF and the World Bank) raped citizens of the world, especially the citizens of the poor countries, on behalf the United States and the top capitalist nations in Europe. The IMF has been a front for the lords of finance of Wall Street in the USA, and the linkages between the IMF/Wall Street and the US Treasury ensured that the poor of the world subsidised the US military. As junior partners in the imperial chain of domination, the Europeans worked with the Wall Street-Treasury alliance to ensure that despite presenting arguments about free market competition, agriculture in Europe and the USA was subsidised. In pursuit of the alliance of financial rapists and economic terrorists, it was an unwritten rule that the managing director of the IMF should be a European.

The current French finance minister is campaigning hard to becoming the next managing director and has received the support of an institution that is as moribund as the IMF, the Group of 8 (G8). It is a measure of the disrespect that the capitalists have for Africa that they could propose Christine Lagarde as the candidate to be the next managing director. France has been at the forefront of the massive plunder of Africa by European states, and the IMF has been complicit in this plunder. France continues to be a safe haven for the money stolen from Africans by African kleptocrats and Western elites and corporations. The IMF has assisted in granting immunity to Europeans and North Americans for crimes of economic rape against Africans.

Many in France who call themselves socialists have been in denial about the rape of Africa. Instead of supporting activists such as Eva Joly who have been exposing the fraud and corruption of France in Africa, these ‘socialists’ are claiming that Strauss-Kahn was set up. A former culture minister Jack Lang described the treatment of Strauss- Kahn as a ‘lynching’ that had ‘provoked horror and aroused disgust’. Clearly, these members of the French socialist confraternity do not understand the real lynching that is part of the racist structure of western capitalism. Indeed, this moment of the prosecution of the French-born high priest of the IMF over the physical sexual assault of an African is an opportune moment for persons who have been affected by the decades of economic rape perpetrated by the IMF around the world to call for the dismantling of the Bretton Woods system and set about the establishment of a new international financial architecture dedicated to repairing the planet earth and for the reconstruction of livelihoods. Read more
Posted by Horace Campbell at 11:18 AM