Beyond the Privatization of Liberation 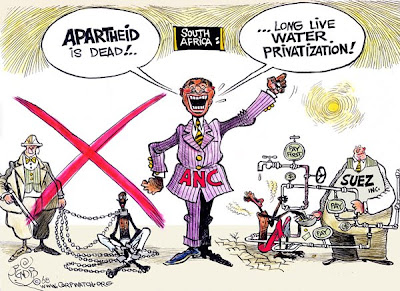 South Africa is a society where the actions of political leaders in the state machinery are threatening to reverse of the popular struggles for liberation. Seventeen years ago, the formal shackles of apartheid were rattled. But the structural basis of apartheid was never dismantled. When Nelson Mandela became the head of state in 1994 there had been euphoria all over Africa, indeed all over the world, that a new road toward a non-racial democracy was being taken. The majority of the people wanted a better life: an end to racism, access to health, life, peace and a decent environment. However, very soon after the integration of the ANC (African National Congress) into the structures of apartheid, the political leadership of the African National Congress turned their backs on the ideas of transforming the society and embraced the ideas of liberalisation and the privatisation of the economy. The ANC embraced unbridled capitalism. Using the cover of reconciliation, the former powerful transnationals supported a class of blacks to enter banking, insurance and retailing as long as they accepted the standards of racist hierarchy and sent their children into the schools that taught Eurocentism.

The ANC was a party that was based on a tripartite alliance: the ANC, the Congress of South African Trade Unions (COSATU) and the South African Communist Party (SACP). Of these three partners the most forthright in calling for fundamental change was COSATU. The South African Communist Party aspired to be the intellectual and ideological standard bearer for the alliance. At one level the path toward liberalisation should have been opposed by the SACP, but the South African Communist Party found a convenient formulation to support the capitalist road. Their understanding of the stages theory of Marxism meant that South Africa had to pass through a period of capitalist development before the working class could be ready for an alternative to capitalism. This theoretical understanding of Marxism that twisted the revolutionary ideas of class struggles justified the support for the privatisation of large sections of the economy. In a very short time, international capital understood that the faces at the top may have changed but the conditions of exploitation and plunder would not fundamentally change. Read more
Posted by Horace Campbell at 1:42 PM