African Liberation and the Quest for a United, Democratic Africa: The Inspiration of Tajudeen Abdul-Raheem 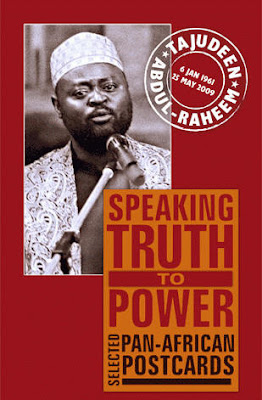 On May 29, four days after African Liberation Day celebration, Nigeria will swear in its third democratically elected president since its return to civilian rule in 1999 after decades of military dictatorship. As Nigeria makes strides towards achieving the aspirations of the people for a better society, many challenges stand on its way. Throughout the recent election season, political careerists who are gung-ho about the old politics of exploiting ethnic, regional, and religious differences continued to use languages such as zoning, Christian south vs Muslim north, southern candidate vs northern candidate, etc, in attempts to clog the wheel of Nigeria’s democracy and unity. As they risk being swept aside by the new wind of change in Africa, these old style politicians still lurk in the dark after the elections, seeking to sharpen their tools of divisiveness and chauvinism.

The freedom, unity and genuine independence of Nigeria are linked to the unity and freedom of all of the peoples of Africa. Africans in all parts of the world understand that the international struggles to end racism and exploitation is linked to the current struggles for emancipation in Nigeria and in Africa. Africa is now in a revolutionary moment and the forces of plunder and economic rape are seeking to maintain the old relations of exploitation and division. To confront the old style politics, we want young Africans to draw inspiration from the life of an illustrious Pan Nigerian democrat and towering Pan Africanist and humanist, the late Dr. Tajudeen Abdul-Raheem, who passed away on African liberation Day (May 25, 2009) in the course of organizing for better society. As we pay tribute to Dr. Tajudeen on this 2011 African Liberation Day celebration, we want to remind younger Nigerians that a better Nigeria and a stronger and united Africa is realizable

Tajudeen was born in Funtua, Katsina, in Northern Nigeria to a Yoruba father from Ogbomosho in South-West Nigeria. He would have been fifty in January 2011. While cherishing his Yoruba/Ogbomosho heritage, Tajudeen was culturally Hausa, energetically Nigerian and politically African and Pan African. He identified with other Nigerians in a national context so that it was difficult to box him into any particular ethnic category. He lived above the fault lines of religion and ethnicity. Tajudeen was at home in Kampala, Nairobi, Abuja, Funtua, London , Barbados or any part of the Pan African world. He connected with democrats from across Nigeria, Africa, and the Diaspora. He spoke Hausa fluently and identified with all oppressed people across ethnic and religious lines. He practiced his Islamic religion while advocating that Christians and followers of other religions (including non-believers) have equal religious freedom as did he. He reviled the religious hypocrisy and ethnic chauvinism of leaders and politicians who exploit diversity for political ends. He worked to defend the rights of women and constantly humanized the actual conditions of women who were dehumanized by sexism and male chauvinism. He wrote about his sister who died in child birth and properly remarked that women should not die while trying to bring new life into being. Read more

Posted by Horace Campbell at 4:11 AM