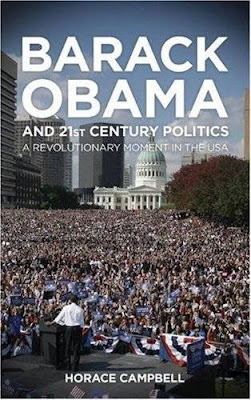 Campbell argues that Obama was caught in this revolutionary moment, though he is not a revolutionary (p 271). As a major actor in the revolutionary moment, Obama leveraged the values and lessons of his upbringing and his training. He had been influenced by the humanist values of his mother and by the lessons he learned as a student of the black liberation struggles (p xiii). Also, his worldview of the historical struggle against domination had been broadened by his reconnection with his African heritage in Kenya (p 29). Read more

Posted by Horace Campbell at 11:24 AM