US Military and Africom: Between the Rocks and the Crusaders

The Western bombardment of Gaddafi’s forces in Libya has become an opportunistic public relations ploy for the US Africa Command and a new inroad for US military stronghold on the continent. This involvement of Africom in the bombardment is now serving to expose the contradictions and deceit that have surrounded the formation of this combatant command, which has been presented by US policy makers as a front for military humanitarian assistance to Africa in coordination with the US Department of State and the US Agency for International Development (USAID). Attempts by the USA to re-militarise its engagement with Africa is extremely dangerous, given the fact that the US does not have any positive or credible tradition of genuine assistance to freedom fighters and liberation movements in Africa.

The US was complicit in the planning of the murder of Patrice Lumumba of the Congo, after which they propped up the monstrous dictator Mobutu Sese Seko who raped and pillaged the country and established a recursive process of war, rape, plunder, corruption, and brutality which the Congo still suffers from till today. Jonas Savimbi was sponsored by the US to cause destabilization and terror in Angola. The US gave military, material and moral support to the apartheid regime in South Africa while anti-apartheid freedom fighters, including Nelson Mandela, were designated as terrorists (it was only in 2008 that the US Congress passed a bill to remove Mandela’s name from the terrorist watch list ). The US has yet to tell the truth about how Charles Taylor escaped from its prison custody to go destabilize Liberia. Young people who are recruited for the US military and deployed to Africom may not know much about the notorious history of US military involvement in Africa. The military top brass take advantage of this ignorance among the young folks.

WHO ARE THE CRUSADERS?

In a recent article in Foreign Policy, veteran US investigative journalist Seymour Hersh was reported to have revealed that there is a faction of the US military known as Crusaders. Hersh asserted that these Crusaders are bent on intensifying a war against Islam, and see themselves as protectors of Christianity. According to this report, Hersh maintained that these neoconservative elements dominate the top echelons of the US military, including figures such as former commander of US forces in Afghanistan Gen. Stanley McChrystal and Vice Admiral William McRaven. These crusaders have held American foreign policy hostage. Hersh said, ‘What I'm really talking about is how eight or nine neoconservative, radicals if you will, overthrew the American government. Took it over.’ Read more
Posted by Horace Campbell at 11:16 AM Links to this post

The US Uses No-fly Zone as Public Relations for Africom

US military planners are using the US's involvement in the establishment of no-fly zone over Libya as public relations effort to give credibility to the controversial US Africa Command which the African peoples have rejected. I discussed this and other issues surrounding the conflict in Libya on the program Flashpoints on KPFA Radio. Click here for the discussion.
Posted by Horace Campbell at 9:28 AM Links to this post

In this debate on RT television I maintained that the coalition forces in Libya must be stopped from going beyond the mandate of the UN Resolution 1973 that authorized the no-fly zone. It is up to the Libyan people to carry out a regime change against the brutal dictator Muammar Gaddafi. The West must should not use regime change to hijack the revolutions going on in Africa and the Middle East.
Posted by Horace Campbell at 8:58 AM Links to this post 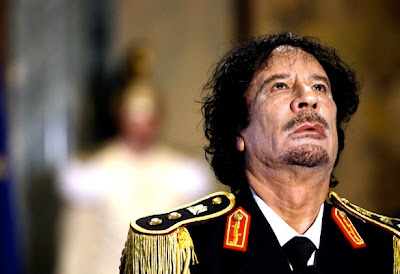 The Union shall have the right ‘to intervene in a Member State pursuant to a decision of the Assembly in respect of grave circumstances, namely: war crimes, genocide and crimes against humanity’ – Article 4(h) of the Constitutive Act of the African Union.
The images of Tomahawk cruise missiles and bombs raining down on Libya from British, French, and US warplanes have ensured that many people now oppose the foreign military intervention in Libya. Yet, the same people were condemning the killing of civilians by the dying Gaddafi regime. On the surface, it may seem to be a contradiction to oppose both the West and Gaddafi, but this contradiction arises from the reality that there is no popular democratic force in Africa capable of mounting the kind of intervention that is necessary to translate Article 4(h) of the Constitutive Act (the charter) of the African Union into action. There is no international brigade similar to the period of the Spanish Civil War when anti-fascist forces mobilised internationally to fight General Franco. There is no Tanzanian Peoples Defence Force (TPDF) with its tradition of supporting liberation that had the capabilities to fight and remove Idi Amin who was butchering Ugandans. The emerging new powers such as Turkey, Brazil, Russia, India and China are quite quick to do business in Africa but are quiet in the face of mass killings. In short, the world was willing to stand by as Gaddafi called those who opposed him ‘cockroaches’, ‘rats’, and ‘germs’ and vowed: ‘I will fight on to the last drop of my blood.’ The sight of the array of forces at the gates of Benghazi meant that this was not an idle threat.

Decent human beings who wanted to halt Gaddafi’s massacre welcomed UN resolution for a no-fly zone, especially the language of paragraph 6 which decided ‘to establish a ban on all flights in the airspace of the Libyan Arab Jamahiriya in order to help protect civilians.’ France, Britain, and the US quickly used this authorisation for a no-fly zone to give themselves a mandate that is wider than the UN resolution, particularly capitalising on the looseness of the formulation of ‘all necessary measures’. Although the Africa Union issued a statement saying that, ‘the situation in North Africa demands urgent action so that an African solution can be found,’ the AU dragged its feet and gave up its responsibility to prevent the massacre of civilians in Libya, thus giving justification to the Western intervention. After forming a committee comprising of Mauritania, South Africa, Mali and Congo and Uganda, the AU sidelined itself at precisely the moment when clarity was needed to both oppose the Western intervention and to intervene to stop the killing of humans that Gaddafi called ‘rats and germs.’ Read more
Posted by Horace Campbell at 4:17 PM Links to this post

Wisconsin's Lessons for the Working Class

‘The images of tens of thousands of workers and their supporters – including teachers, students and firefighters – who took part in the occupation of the Capitol Rotunda in Madison, Wisconsin for more than two weeks have reignited the morale and militancy of the labor movement. Even beyond labor, the scenes from Wisconsin have shown ordinary people the power they possess when they are organized and take bold action. Many who visited Madison in the first two weeks of the struggle commented on the breathtaking spirit of solidarity among the protesters, the efficient operation of self-organized demonstrators, and the display of democracy come to life.’

This statement by the labour journalist Brian Tierney on the self-organisation of working people to defend their democratic rights in the midst of the extended capitalist crisis brings out the realities of the current political and ideological struggles in the United States. Before the news of the multiple tragedies of earthquake, tsunami, nuclear crisis and massive loss of lives in Japan dominated the consciousness of people in all corners of the world, the images of hundreds of thousands of workers demonstrating for their rights as humans in Wisconsin competed with the images of uprisings in Yemen, Bahrain, Libya and Oman.

Wisconsin is one state in the USA where there are progressive traditions as well as very conservative heritages. It was the state that produced the dreaded Senator Joseph McCarthy who pursued one of the most systematic anti-communist witch-hunts during the Cold War. It is also the state where there were intense and militant demonstrations against the war in Vietnam. Senator Russell Feingold was for a long time the representative for this state until the conservative forces nationally poured millions into the state to defeat him in the last round of elections in November 2010. In this Republican sweep Scott Walker became the governor of Wisconsin state and promised to continue the job of Ronald Reagan: Breaking the organised workers of the USA. Read more
Posted by Horace Campbell at 1:05 PM Links to this post

Saluting the Revolutionary Women of Egypt on International Women’s Day 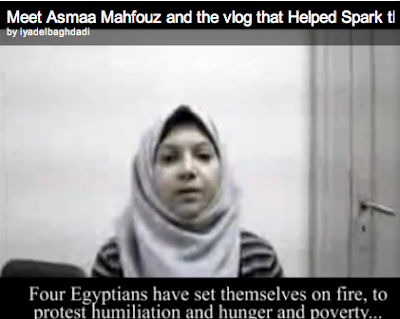 When the revolutionary momentum in North Africa erupted onto the world stage at the start of January 2011, the world was exposed to a new force in international politics. This force was sustained by the energy and power of the grassroots women and youths of Africa. We want to use this day, the 100th anniversary of the commemoration of International Women’s Day, to salute the women who emerged in the leadership of this revolution that is still under way. In particular, it is important to salute women such as Amal Sharaf and Asmaa Mahfouz of the April 6 Youth Movement of Egypt, who showed exemplary leadership in challenging the much-dreaded Mubarak regime. These women are part of a new generation of revolutionaries who are fighting to shift the power in society from patriarchs and capitalists to working women and men. African peoples throughout the world have embraced the celebration of International Women’s Day, even though at the inception of this celebration, people of African descent were discriminated against in the mainstream women’s movement. We salute those women from Egypt along with the women who call for investment in caring instead of killing. Read more
Posted by Horace Campbell at 11:20 AM Links to this post

Opposing US-Led Invasion of Libya: My Discussion with Amy Goodman of Democracy Now* 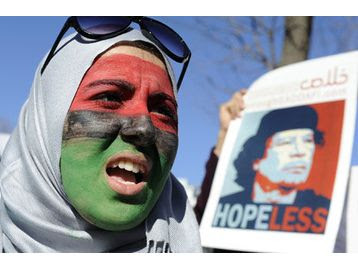 *I was interviewed by Amy Goodman of Democracy Now on the question of the unfolding situation in Libya. I maintained that we must oppose Gaddafi's massacre of Libyans as much as Libyans should desist from xenophobia against their fellow Africans. The peace and justice movements must also oppose any foreign invasion of Libya.

Below is a short excerpt from the interview, followed by links to the videos.


The Libyan revolution is a situation that is maturing with very deliberate and great dangers for the revolutionaries. The dangers arise from the number of areas: firstly, the massacres that have been carried out by Gaddafi himself and the clique around Gaddafi; secondly, the dangers that are coming from the drumbeats for Western military intervention; and thirdly, the kind of xenophobia and anti-African, anti-black sentiment that is being stirred up among sectors of the Libyans who are rising up for freedom.

It is up to the peace and justice movement in this country to stand with one voice to say that at this point any kind of humanitarian intervention must be through the United Nations and to support those who are suffering at the borders and those who are suffering inside of Libya. We do not need military intervention by Britain, United States or any forces of NATO at this present moment.

Posted by Horace Campbell at 9:53 AM Links to this post