Revolution and Reconstruction in Egypt 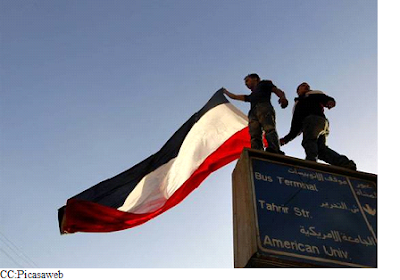 Today the victory of the peoples of North Africa over one of the most repressive police states in the world is shifting the balance of power in international politics; it is also strengthening people’s power against exploitation, sexism, domination, police repression and those forms of rule that have been associated with neo-liberal capitalism. After resisting 18 days of protest from millions of Egyptians who want the birth of a new Egypt, Hosni Mubarak stepped down from his 30-year presidency on Friday 11 February. From Djibouti, Libya and Yemen, to Bahrain, Iran and Algeria, youths are standing up for freedom as the ripple effects of the Tunisian and Egyptian revolutions act as a school for new revolutionary processes.

As the people of Egypt move to consolidate their victory there is a sense of dual power – that of the people organised in the streets, and the power of the military that took the reins of the state in the aftermath of Mubarak’s exit. Though they have dissolved the Mubarak puppet parliament and suspended the Mubarak-serving constitution, these military officers continue to dither on crucial issues, such as the lifting of emergency powers and the release of political prisoners.

In order to exercise their newly gained freedom and express their lack of confidence in military government, workers extended their industrial actions after strikes broke out in all sections of the economy. Even the police who were the frontline repressors came out on strike, seeking support from a public that they had oppressed a few weeks before. There are reports that in some enterprises bosses are running away and workers have to begin to manage the institutions because the bosses have been implicated by their collusion with the police state. These actions by workers, along with actions by the rural farmers, signalled to the military that the exit of Mubarak was only a minor step and that the tasks of the revolution were not yet accomplished. The ultimate task is to end oppression and give dignity to the people.

In my previous articles, I drew attention to the issues of self-organisation and self-emancipation in this context of the uprising to remove Hosni Mubarak from power, and I outlined four significant stages that make up the first phase of the revolution. The stepping down of Mubarak has now paved the way for the second phase of the revolution, which is that of reconstruction. In the second phase, the challenge is how to deepen the victory of the people so that what was won politically is not taken away by a transition that is built on the ideals of ‘liberal democracy,’ where there are no fundamental changes in the economic edifice that was built by Sadat and consolidated by the clique around Mubarak. This is the stage where questions of reconstructions are linked to the structural transformation of revolutionary societies.

Mubarak could never have accumulated a fortune of US$40-70 billion through control over the state alone. More
Posted by Horace Campbell at 2:16 PM