Opposing Massacres in Libya: A Call for Solidarity and Vigilance 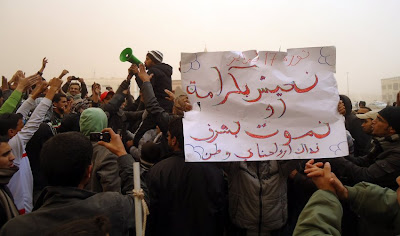 The news of the massacre of innocent citizens of Libya by the dying regime of Colonel Muammar Gaddafi reminded the world of a number of basic facts. The first is that dictators everywhere are weak and require brute force to remain in power. The second is that an organised and dedicated people can enter the political stage and bring about revolutionary situations. Third is the new awareness that once the people gain confidence and the wave of revolutionary energy sweeps through Africa, no external force can contain this energy and no foreign military intervention can derail liberation. And fourth is the reality that money cannot guarantee political loyalty for long. It is for these reasons that in the last seven days, not even the US$150 billion of foreign reserves controlled by Gaddafi and his sons can save the regime from a people who want basic freedoms. These points have been driven home by the rapid disintegration of the governments in North Africa and the Middle East with the Tunisian and Egyptian revolutions leading the way to a new era of political change in world politics. It is apt to term the Libyan uprising a revolutionary situation to distinguish this first phase of the Libyan rebellion from the robust forms of self-organisation that had matured inside of Tunisia and Egypt.

From Ethiopia to Gabon and from Djibouti to Yemen and Bahrain, the stirrings of the oppressed have exposed those governments that used the so-called ‘War on Terror’ as a smokescreen to exploit the mass of the people. In every country of Africa and the Middle East, dictators are calling on each other to dust off manuals on repression as people defy the weapons and torture to demand a new mode of economics and politics. The struggles for freedom in Libya and the dying spasms of Gaddafi are particularly noteworthy because Gaddafi and his Western backers had calculated that this dictator could use the billions of dollars from hydrocarbons to not only buy weapons but also to seek to bribe all and sundry. On Tuesday 22 February the Security Council of the United Nations expressed ‘grave concerns’ about the mass murders that were being carried out by paid militia persons as the permanent members of the same UN Security Council rushed to cover their tracks in relation to their military support for Gaddafi. The Arab League expelled Gaddafi while numerous governments in Europe lined up behind cameras to condemn the killing of innocent civilians. Belatedly, after the Arab League expelled Libya, the chairperson of the AU Commission, Jean Ping, expressed ‘deep concern’ about what was going on in Libya. It is in the face of the timid position of the leaders of the African states that this statement wants to forthrightly express solidarity with the peoples of Libya and their demand to end the Gaddafi police state.

DISTINGUISHING THE OPPRESSED FROM THEIR OPPRESSORS

We seek to distinguish between the peoples of Africa who have been oppressed by Gaddafi and his allies and those mercenaries who are now on the streets killing innocent civilians. One can understand the anger of the citizens of Libya, who are being killed in cold blood, but it is urgent that in the process of a rebellion, xenophobia and racist ideas are not brought into the opposition to Muammar Gaddafi. More
Posted by Horace Campbell at 1:18 PM