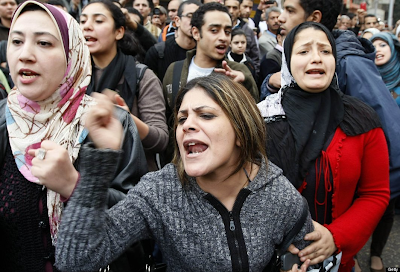 The renewed energy of the popular power in the streets of Egypt ensured that the political initiative remained in the hands of the grassroots mobilisers who had come together to trigger an uprising that is now called ‘the people’s revolution’. Their continued tenacity and strategic planning shocked observers, who were already reporting that ‘the protests were running out of steam’, and that ‘life was returning to normal in Cairo.’ What was considered ‘normal’ for the international capitalist forces that supported the Mubarak regime was the fact that banks were opening and there were traffic jams on the bridges across the Nile. But these stories could not conceal the floods of freedom as more people surged onto the streets to demand the immediate removal of the Mubarak regime. This reenergised outpouring of support for the revolution was beamed around the world as citizens everywhere who wanted genuine democracy watched and calculated the balance of forces in the revolutionary process. Was the tide shifting toward revolt elsewhere? This was the question being raised in all continents as ideas of sharing, cooperation and repair were challenging greed and obscene wealth in the midst of grinding poverty.

In all revolutionary situations, small acts of groups and individuals acquire historical importance. The coming-together of the grassroots organisers to form the ‘Unified Leadership of the Youth of the Rage Revolution’ represented one moment of historical significance. At this stage of the revolution, the interview of Wael Ghoneim, who was released from state detention on Monday 7 February, became one more barometer of the temperature of the people who wanted change. Wael Ghoneim, a business operator for an international information-age company, had been arrested by the secret police. His testimony on the brutality and murder of those picked up by the secret police again exposed to millions the nature of a police state in Egypt that was called a stable democracy. As the revolution gained new momentum, people demonstrated in differing parts of urban centres, even around government offices and the disgraced parliament. Thousands of workers intensified industrial actions to cripple the regime.

MAINTAINING THE FOCUS OF THE REVOLUTION

Esam al-Amin, in his writing on the leaders of the youth movement who are emerging as core organisers and future leaders (‘Meet Egypt's Future Leaders’), spelt out the principal demands being made. Inter alia, these demands were: the resignation of Mubarak, the immediate lifting of emergency law, release of all political prisoners, the dissolution of both upper and lower chambers of parliament, the formation of a national unity government to manage the transitional period, investigation by the judiciary of the abuses of the security forces during the revolution and the protection of the protesters by the military.

From their statements on the internet and in interviews, the youths have made it clear that their demands are not only for the removal of Mubarak but that they are also calling for constitutional reforms in the areas of civil rights, political freedoms and judicial independence, and economically addressing poverty, unemployment, social justice and fighting corruption. It is clear however that political freedoms and social justice cannot be realised within the context of the present mode of economic organisation. Moreover, as in Tunisia, the corrupt and discredited members of the oligarchy want to remain within the national unity government for the transitional administration.

One of the many challenges of current stage of what some analysts have called ‘the Nile Revolution’ is how to take the revolutions in Tunisia and Egypt through the twists and turns of the counter-revolutionary planning and scheming coming from the remnants of the old order. How could the Egyptian and Tunisian peoples achieve the ultimate goal of the revolutions? The goal of these revolutions, as expressed by the millions who took to the streets, is a society that would ensure the human dignity of its citizens by dismantling the old order of government corruption, repression of freedoms, political alienation and denial of economic rights. The challenge is now how to build on the momentum of the ongoing revolutionary process for a structural reorganisation of the economies to meet the basic needs of the people over and above the interests of local and foreign capitalists and militarists.

From Alexandria to Suez, and in some cities that did not play a significant part in previous demonstration, workers are building industrial actions to support the new energy. In particular, the emergence of judges, lawyers and other professional strata on the streets of Cairo at a time many thought the revolution was losing steam has pointed to the realisation by sections of the elite that they can no longer be silent in the face of the corruption of the values of the society. In a society of over 7,000 years of traditions, where sharing and collective security had defined the birth of human civilisations, these social forces are seeking redemption from the devaluation of human life by the system that placed profits over human life. The constant renewal of this energy and the consolidation of the revolutionary gains made so far are critical to maintaining the focus of the revolution. Read More
Posted by Horace Campbell at 10:18 AM