Echoes from Tunisia and Egypt: Revolutions without Self-proclaimed Revolutionaries 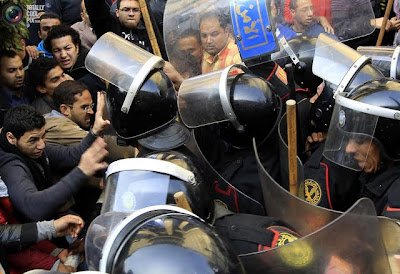 ‘It was a victory parade – without the victory. They came in their hundreds of thousands, joyful, singing, praying, a great packed mass of Egypt, suburb by suburb, village by village, waiting patiently to pass through the “people's security” checkpoints, draped in the Egyptian flag of red, white and black, its governess eagle a bright gold in the sunlight. Were there a million? Perhaps. Across the country there certainly were. It was, we all agreed, the largest political demonstration in the history of Egypt, the latest heave to rid this country of its least-loved dictator. Its only flaw was that by dusk – and who knew what the night would bring – Hosni Mubarak was still calling himself “President” of Egypt.’

This is how Robert Fisk of the Independent of UK captured the mood of optimism of the peoples in Tahrir Square (also called Liberation Square) in Cairo before the veiled fist of counter-revolution unleashed its whip to reverse the initiative of the popular uprising in Cairo. On Tuesday 1 February there were over 2 million people gathered on Liberation Square to demand the removal of Hosni Mubarak, and on Wednesday 2 February plain-clothes police and armed thugs mounted on camels and horses stormed the unarmed citizens, attempting to kill and brutalise those who want to be free. The people stood their ground and beat back the government thugs.

The peoples of Egypt had grabbed the attention of the world as oppressed peoples all over took courage from the new sense of purpose of the Egyptians. Their confidence and freedom from fear has inspired oppressed people in all parts of the world, and there are already popular uprisings and protests in Jordan, Yemen and Sudan. Not far behind are citizens in Algeria, Cameroon and Libya who are slowly stirring and demanding political and social change.

The peoples of Egypt and Tunisia have made their mark on the world stage and they have shifted the balance of power back to ordinary people. They have re-established the essence of popular democratic participation and elevated the issues of the politics of inclusion. This shift is bringing back the sense of power to the exploited all over the world. Oppressed peoples all over the world now take courage from the new sense of purpose of the demonstrators. Their confidence and freedom from fear have been so inspiring that there are already popular uprisings and protests in Jordan, Yemen and Sudan. Not far behind are citizens in Algeria, Cameroon and Libya, who are slowly stirring and demanding political and social change.

Indisputably, youths are rewriting the meaning of revolutionary organisation and at the same time exposing the hollowness and hypocrisy of the liberal ‘democratic’ posture of Western imperialists. It is this same Western liberal force that supported the regime in Egypt as a bulwark of ‘stability and counter-terrorism’ in North Africa and the Middle East. By unleashing thugs and state security personnel to attack the unarmed civilians, the Egyptian revolution now poses a challenge of the fourth stage of the revolution: how to harness the ideas of revolutionary non-violence to be able to stand firm and fight back against internal and external provocations. In this standoff, the army will be put to the test as the external supporters of the moribund Mubarak regime seek to crush the revolutionary spirit of the people. One of the important tasks of the peace and justice movements internationally is to oppose the militarists who will seek to exploit the moment of transition to foment war and military interventions. Read more
Posted by Horace Campbell at 1:13 PM